In today’s world, businesses are sued daily and 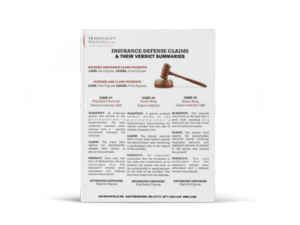 As a multi-state liquor liability insurance company, it’s our responsibility to protect our policyholders.

Take a look at some of the alcohol-related insurance claims and dram shop lawsuits against our restaurant policyholders that our team of Attorney’s have successfully defended.

PLAINTIFF: An underage patron was served at our policyholder’s establishment. He then randomly attacked other patrons with a hatchet concealed beneath his overcoat.

CLAIM: The claim filed against our policyholder alleged their failure to secure the premises.

VERDICT: After only one hour of deliberation, the jury concluded that the assailant’s actions were unforeseen and defense verdict was entered.

PLAINTIFF: A patron ordered several drinks at our policyholder’s establishment. Upon leaving, his vehicle collided with the rear of another motorist’s van.

CLAIM: The injured motorist filed a dram shop lawsuit against the policyholder after becoming a quadriplegic due to the impact of the accident.

VERDICT: An arbitrator concluded that the evidence in this case, was inconclusive as to whether the patron was ever at the policyholder’s establishment on the date of the accident. The arbitrator sided with the defense.

PLAINTIFF: The plaintiff was struck in the face with a pool stick resulting in a fractured jaw that was wired shut for several months.

CLAIM: The lawsuit filed against the policyholder included counts involving negligent security and negligent service of alcohol to the patron who injured the plaintiff.

VERDICT: The jury concluded that the assailant’s actions were unforeseen and a defense verdict was entered.

For more information about how you can work with Hospitality Insurance Group as an Independent Insurance Agent or obtain a quote for liquor liability insurance, click here to request a call from us, email or office visit from one of our local representatives near you.