Why Bars Should Keep Surveillance Footage For Insurance Claims

How To Winterproof Your Workplace

How to winterproof your workplace to avoid slip and fall insurance claims against your business during the winter months.

Bar Room Brawls: 3 Assault & Battery Situations That Could Happen At Any Bar 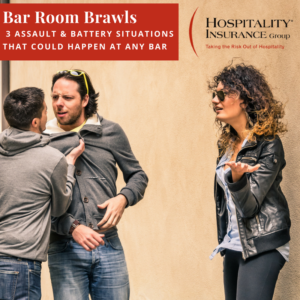 For any establishment that serves alcoholic beverages, a fight possibly breaking out is always in the back of any owner’s mind.

According to Insurance Magazine, about 30% of losses at bars, taverns, and nightclubs arise from assault and battery claims.

Out of the thousands and thousands of claims filed, here are three situations we’ve worked with our policyholders when an assault and battery occurred at their establishment.

A patron alleged that he was repeatedly assaulted while exiting the establishment after the last call.

The policyholder had purchased an assault and battery endorsement as part of their liquor liability policy issued by Hospitality Insurance Group.

The defense attorney, hired by Hospitality to defend the establishment against this plaintiff’s lawsuit, obtained a defense verdict on behalf of the policyholder.

This establishment was not the type of bar that you would think would have an altercation of any sort.

A gentleman entered our insured’s establishment and was served a single drink.

During the night, the gentlemen casually conversed with other patrons until he randomly started violently attacking patrons with weapons concealed underneath his sweatshirt.

None of the injured customers could recall any signs that would have forewarned them of the assailant’s violent propensity.

This incident was a sudden and unforeseen violent crime that occurred on the insured’s premise and was covered by the assault and battery endorsement on their liquor liability policy, issued by Hospitality Insurance Group.

A patron appeared to have entered our policyholder’s establishment already intoxicated.

While inside, the man was said to have disturbed three different groups of patrons and was later struck by a patron inside the bar, causing him to fall and suffer a head trauma.

This policyholder had purchased an assault and battery endorsement as part of their liquor liability policy issued by Hospitality Insurance Group.  The defense attorney, hired by Hospitality to defend the establishment against the plaintiff’s lawsuit, obtained a defense verdict on the policyholder’s behalf.

As also advised by Nightclub & Bar, general liability insurance with assault and battery and liquor liability coverage is usually the best way for restaurant owners to protect themselves in the event of a fight at their business.

When examining your insurance policy, it’s important to ask if you have assault and battery coverage. It’s not uncommon for an insurance carrier to apply a specialized exclusion for assault & battery exposure as we explain in our blog, “Assault & Battery: Where’s the coverage?” Exclusions may occur, and in the event of a bar fight breaking out, a restaurant owner could be denied coverage if an incident like one of these occurs.

Not sure if you have the proper coverage? Hospitality Insurance Group is a liquor liability insurance group writing insurance for bars and taverns in Connecticut, Massachusetts, New Hampshire, North Carolina, Pennsylvania, Rhode Island and Vermont. For more information about how you can work with Hospitality Insurance Group as an Independent Insurance Agent or obtain a quote for liquor liability insurance, click here to request a call from us, email or office visit from one of our local representatives near you.