Why Bars Should Keep Surveillance Footage For Insurance Claims 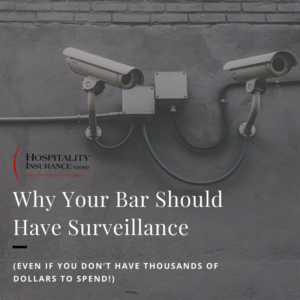 Every bar owner wants to prevent a liquor liability claim from occurring which is why having surveillance footage is invaluable should an incident be alleged.

Fights, theft, and vandalism are all unfortunate responsibilities of a restaurant owner. In addition to security and staff training,  having a surveillance system installed is one thing that can protect you from a possible lawsuit that could potentially shut down your entire operation.

Many will agree that when surveillance is installed and noticeable by patrons, behavior amongst patrons tends to change. Some cities have even passed ordinances that require new alcohol licensees to install surveillance cameras before the restaurant can officially open for business.

At Hospitality Insurance Group, once a claim is filed, one of the first questions our Claims Examiner will ask is if there is any surveillance footage on the date of the incident. So if the inevitable does happen, having proper surveillance footage can make your life, and your insurer’s life, a lot easier.

We even send a claim acknowledgment letter to policyholders once a claim is reported instructing them to preserve tapes and other evidence relating to the case because around 70% – 75% of policyholders do not preserve their tapes.

If something happens at the bar, the insured should review and safeguard the tape until the statute of limitations runs out, which is usually around three years.

But what happens if you’re a small operation? One common objection we hear from our bar and restaurant policyholders is, “My restaurant is tiny! I don’t have that kind of money to spend on surveillance!”

Thanks to the wonderful world of online shopping, surveillance footage is even easier and more affordable than ever.  We took a look at Amazon.com and found surveillance equipment, many of which can be monitored right from your smartphone.

If you’re looking for something affordable, we found this Hiseeu Wireless Network security camera has 4 out of 5 stars on Amazon for only $35.

We also found AMCREST Video Security System with Eight Weatherproof Cameras for only $399.

Whichever system that you may find is the best fit for your bar, restaurants and bar owners should take note of the loop setting as some systems preserve footage for 5 days, 7 days or 30-day loop prior to footage being taped over.

Fights, theft, and vandalism are all unfortunate responsibilities of a business owner. In addition to security and staff training,  having a surveillance system installed is one thing that can protect you from a possible lawsuit that could potentially shut down your entire operation.

Roughly 75% of our policyholders do not preserve their surveillance tapes after the claim has been reported to our team. Failure to save video can increase the payout of a claim up to $200,000 per claim.

IF something happens at your establishment, you should review and safeguard the surveillance tapes until the statute of limitations runs out, which is usually around three years.

IF you are aware of any incidents such as the police were called, a fight happened in the establishment, or a drunk driving incident  – these are situations where we look to you to provide us that surveillance footage during the claims process.

We recommend testing your surveillance system regularly to ensure that your system is functioning and working correctly.

Surveillance footage is evidence. Policyholders can face harsh penalties if evidence is lost, destroyed or erased following an incident.

Download our “What You Need To Know About Keeping Your Surveillance Footage For Insurance Claims Against Your Business” flyer here.

Please be advised that the views expressed are of the author alone and shall not constitute a legal opinion.