Hospitality Insurance Group is launching a new program that will give bars, restaurants, and any other eligible liquor liability policyholders more flexibility in how they pay their insurance premiums.

The Pay as You Pour program, offered in partnership with First Insurance Funding, will help businesses improve their cash flow by basing their bimonthly premium payments on how much liquor they sell. Premium payments will be lower when sales are down and, conversely, when sales volume is higher, businesses will be contributing more to premium payments. The program comes as many in the hospitality industry face a winter slowdown in business, particularly amid the ongoing COVID-19 pandemic.

The program was developed to assist our policyholders not only during the COVID-19 pandemic but for those customers who have seasonal businesses and find it challenging to keep up with their payment installments during their slow times.

“This program will alleviate the financial burden that occurs when insureds have slow months and money is tight, when sales are good, they will pay a higher premium and will be in a better position to make those payments.” said Sandra Haley, Senior Vice President of Underwriting and Marketing at Hospitality Insurance Group.

To participate, businesses must make a down payment of 10 percent, which is significantly less than the usual 20 to 25 percent deposits required to finance premiums. The lower down payment will aid businesses short on cash due to the COVID-19 pandemic.

“Especially with the COVID slowdowns, people simply don’t have as much cash in their pocket. It’s a benefit for them to be able to finance the premium with only 10% down.” said Mark Trombly, Marketing Manager at Hospitality Insurance Group.

The program is a permanent financing option that will continue to be available to businesses after the COVID-19 pandemic.

Participating businesses must also have an acceptable sales verification system to upload. For those who participate in the program the renewal process will be effortless since last year’s sales information will already have been recorded as part of the program.

In addition, businesses who have other policies with Hospitality may include those premiums at the same 10% deposit with 26 fixed installments.

The bimonthly premium payments for the liquor liability will be calculated by taking the average liquor liability rate which will then be multiplied by how much a bar, restaurant, or other business sells in liquor each month.

“At the end of the year, it all settles out and they only pay for what they actually sold during the year,” Haley said.

Pay as You Pour is available to Hospitality Insurance Group’s directly appointed agents. Other agents can access the program through the Group’s wholesale partners. Businesses who want to participate should contact their insurance agent.

The opinions expressed are the views of the author alone and should not be attributed to any other individual or entity and shall not constitute a legal opinion.

Hospitality Insurance Group is aware of the public health concerns of COVID-19 and the impact that governmental restrictions on public gatherings is having on our business partners and policyholders.  We are temporarily adjusting our business practices to reduce the financial impact of these restrictions and have listed the changes below.

Working with our staff

Our staff is available to assist you and prepared to work remotely if needed.  We will have all telephones transferred to employee cell phones to avoid communication interruptions.  We are prepared to continue business as usual during these unusual times.

We have suspended all face to face agency meetings until further notice.  Any previously scheduled meetings will be rescheduled or changed to a teleconference.  You will be contacted by your Underwriter or Marketing Representative regarding changes.

Please check our website regularly to stay updated on any future changes.

We appreciate your assistance and cooperation in these trying times.

An outbreak of a foodborne illness is the angst of every restaurant owner. This type of risk at a restaurant could have significant consequences, potentially leading to liability, reputation damage, fines & penalties, or ultimately closure of the restaurant. As more people dine out at restaurants this summer, it is worth highlighting that the warmer months are the peak season for foodborne illnesses. Fortunately, restaurant owners have several options to help prevent the spread of communicable diseases.

According to the Centers for Disease Control and Prevention (CDC), there are almost 50 million cases of foodborne illnesses in the U.S. per year on average, resulting in over 125,000 hospitalizations and about 3,000 deaths. The most common causes are norovirus, salmonella, clostridium perfringens, campylobacter, and staphylococcus aureas. Less common but more serious are clostridium botulinum, listeria, E. coli, vibrio, and hepatitis A.

Foodborne illnesses can be costly if restaurant owners do not take proper precautions. Therefore, it is essential for restaurants to encourage the proper standards to reduce this type of risk. Restaurant owners can help protect guests from this threat by educating employees about the risks from foodborne illnesses, having them avoid handling food if they are sick, asking them to wash their hands thoroughly before handling food, and to wear gloves whenever possible.

The National Restaurant Association offers a Food Safety Manager Certification as part of its ServeSafe® program that could help reinforce important precautions at your establishment. Another worthwhile precaution includes checking the insurance limits of your general liability coverage with your insurance carrier.

If you suspect you may have experienced an outbreak of foodborne illness, it is important to do everything possible to mitigate the damage by reporting the incident to the appropriate authorities and notifying your general liability insurance carrier.

The opinions expressed are the views of the author alone and should not be attributed to any other individual or entity and shall not constitute a legal opinion.

SOUTHBOROUGH, MASS. (May 16, 2019) — A founding member of Hospitality Insurance Group’s Board of Directors has retired. Gerald Cassidy, who brought decades of insurance experience and knowledge to the Board, announced his retirement on May 8, 2019. 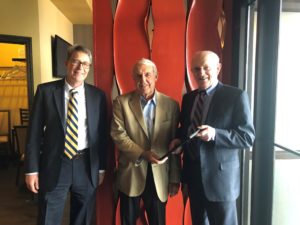 Cassidy served as the President and Chief Executive Officer of Hospital Underwriters Mutual Insurance Company (HUM) when he was a founding member of the board in 2008, and he delivered valuable guidance throughout his tenure.

“I have had the privilege of serving on several boards with Jerry over the last four decades.  He was a gifted insurance professional and a valued personal friend,” said William T. McGrail, HIG Chairman.

A seasoned insurance executive with over 50 years of experience, Cassidy served in managerial roles at St. Paul Fire & Marine Insurance Company and the Phoenix of Hartford Insurance Company.

Cassidy has also lent his expertise to other boards and committees throughout his career. His additional appointments include being on HUM’s Board of Directors and its Executive, Finance, and Employee Benefits Committees, as well as serving on the Board of Directors of Child’s Hospital in Albany, N.Y., Chairman of the Hospital Insurance Forum, and Vice Chairman of the Massachusetts Reinsurance Plan.

Cassidy plans to spend his time between Florida and Maine, where he will enjoy spending more time with his grandchildren and playing golf.